Something special happened on the way to adopting drains

It’s been quite wet in the Bay Area recently. I won’t complain (too much); although I wish the storms were a little gentler (stay safe!), we need it.

In addition to normal rainy day activities, I’ve recently started checking in on a handful of adopted drains (technically, mine are catch basins). You see, sometimes these drains get clogged by debris and a little sweep can help rain flow where it should.

Hundreds of other volunteers have also taken up this rainy day activity through the City’s Adopt a Drain program. The online platform is the result of collaboration among City agencies and civic technology volunteers at Code for San Francisco. It has made visible the roughly 25,000 storm drains and catch basins that the City maintains for an eager community of drain adopters.

There’s been a good deal of local coverage on this lately, so I wanted to share some additional reflections as one of the City partners on this project.

Technology in support of collaboration

I believe technology is best applied in support of a need. The need served by Adopt A Drain in San Francisco is to engage the community in the care and awareness of the City’s drains to help limit localized flooding.

Lucky for us, we had a starting place; an early Code For America project in Boston called Adopt a Hydrant. The code for the project, being open source, was available to copy and modify. In fact, other communities had already set up their own versions like Adopt a Siren in Honolulu and Adopt a Drain in Oakland.

Having leads to follow, the San Francisco edition took off as a project of Code For San Francisco. Working with the SF Public Utilities Commission (SFPUC), Public Works and DataSF, they helped craft code into something that met the needs of San Francisco. It was and continues to be a collaborative effort that involves:

Bigger than an app

This really isn’t a story about technology, however. It’s one about how collaboration and creation lead to a “spiraling upward.” Technology helped us orient to a goal, but the drive comes from elsewhere: a desire to participate in acts of co-creation to improve each corner of this world.

Adopting a drain is a niche application, admittedly, but let’s consider this in a broader context. Here’s what it’s inspired so far:

Toward impact and connection 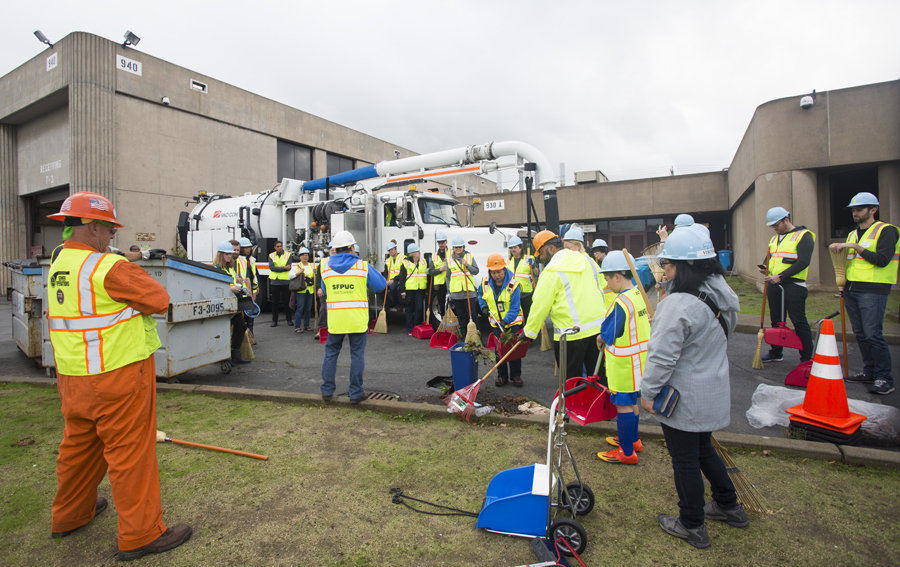 The SFPUC held a fall volunteer event at the Southeast Treatment Plant. Volunteers received tools and vests and some training to keep them safe while tending to drains. Image source: SFPUC Communications

Of the close to 25,000 drains, over 1,000 have been adopted so far by hundreds of volunteers. Adopt a Drain is one tool in a toolkit the City uses to limit and reduce localized flooding. I can’t make bold claims on Adopt A Drain’s specific impact on flooding yet, but it has done something surprising and special: inspire and connect.

Just read this note sent to the SFPUC:

My family of four have typically cleaned the two drains in our neighborhood (which I signed up for tonight) at our corner for the past 25 years. I am glad you began this program as it involves people in our community and helps me teach my sons a sense of civic pride and duty. My father is a retired civil engineer and one of his tasks was to design road drains. My siblings and I grew up understanding the importance of cleaning drains. I have taught my sons this lesson.

I hope this program takes off.

Also, at a recent volunteer event held at the Southeast Treatment Plant, one city employee took it all in and remarked “I didn’t realize people cared.”

Connection is vital. When we are connected, we are inspired, creative and hopeful. The unexpected outcome of this work has been connection: volunteers connected to the City, families connected through civic pride, City staff connected to each other, and so on.

It’s my hope that projects of all scopes and scales seek to connect–to chip away at isolation–so that we care for and build the city we need together. If we can inspire folks with Adopt A Drain, imagine what else we can do!

I’ll leave you with a little video inspiration from the SFPUC about some of the volunteers. And if you’re so inspired, adopt and name a drain today!